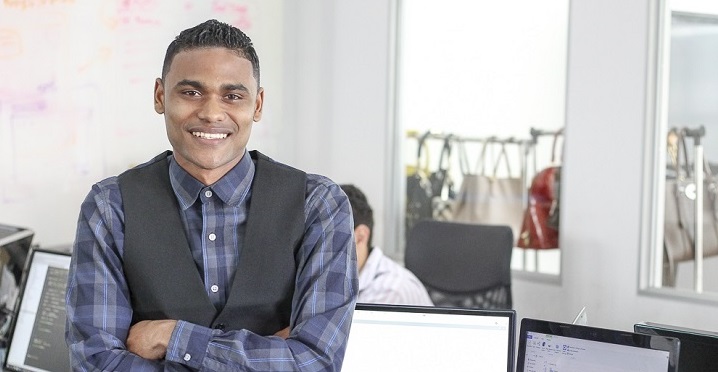 There is a time, place and reason for everything. Persevering at what you love will reap great success. These might well be the mottoes of Alcino van Rooyen, a False Bay TVET College Information Technology and Computer Science NC(V)  graduate whose passion for computers helped him overcome a challenging upbringing and several hurdles in pursuit of education.

As a boy tinkering with dated computers, Alcino would get lost in the mystery of the mechanics. Later on, Alcino’s aptitude for mathematics gave him his first break in the form of a SAILI bursary. After registering at the Cape Academy of Mathematics, Science and Technology, Alcino discovered his true passion for the world of PC programming.

He later joined False Bay TVET College where, after an initially scary transition, he came into his own with the support of a good friend and his College lecturers. Taking on programming projects, Alcino would often be found in the college computer labs doing program research. His dedication saw him graduate a Top Achiever and the recipient of the CEO Award.

Since graduating, Alcino has found his niche as a developer at an innovative online marketing and web design agency located in the trendy Woodstock Exchange, Cape Town.

What started out as a two-month internship turned into a full-time position for Alcino. After starting as a junior developer, he progressed to a developer and has been working as both a front-end and back-end developer.

Alcino appreciates the amazing experiences his employer has exposed him to, although he says his first love remains the creation of web applications. Alcino says with confidence, “I no longer need to worry about whether or not some tasks can be achieved. With my new skills and knowledge from the College I have the courage and ability to solve them.”

An exemplary role model to others at the College, Alcino is on track to a promising future career in IT development.