What is a Script Writer / Screenwriter / Playwright?

People who devote their career to writing for the stage (theatre) are called ‘Playwrights’ while those dedicated to the screen, such televisions and movies, are called ‘Screenwriters’.

A script is a written piece of work which is either an original piece or it can be an adaptation of another, for example: a novel.

Scripts and screenplays tell a story through dialogue in a particular written form.

A Script Writer/Playwright/Screenwriter will write:

Scriptwriting: whether for television, radio, movies, or stage – the competition is extremely high and competitive. Many Scripwriters work on a freelance basis.

Some Scriptwriters will have to hire an agent to book their play for performance. Others will try to get their plays published in books.

What does a Script Writer do?

How do I become a Script Writer?

OTHER CAREERS: Author/Writer … or … Film Critic

Is becoming a Script Writer, Screenwriter or Playwright the right career choice for me? 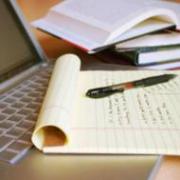