Technological advances have removed many obstacles for disabled people in their aspirations to pursue the careers of their choice.

Many visually, hearing and physically impaired persons excel in the field of computer technology. Blind and partially sighted lawyers are now a reality due to computer developments. Various blind physiotherapists have their own, very successful, practices in this country. There are blind lecturers, music teachers and marketing consultants to name but a few careers. Visually impaired persons can also do manual jobs such as making bricks and tiles.

Deaf and hard of hearing people are often successful in noisy jobs, such as panel beating, which may have a negative effect on hearing people. Careers as different as forestry, graphic art, medical technology and banking are also successfully pursued by hearing impaired people.

People with physical disabilities are successful in many careers including teaching, social work, business management, and many others. Stephen Hawking is one of the greatest scientists the world has ever known, yet he is quadriplegic and can only speak with the aid of a computer. He freely admits that he has reached the top in his field because of and not in spite of his disability. 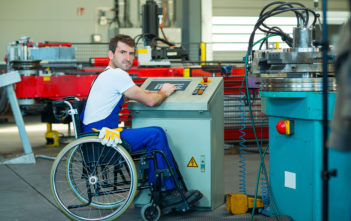 Working with people with disabilities
By Career Planet

WORKING WITH PEOPLE WITH DISABILITIES People with disabilities are often perceived as different from those of us who are not. When we are in the…