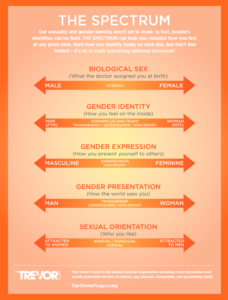 Androgynous: Identifying and/or presenting as neither distinguishably masculine nor feminine.

Bi-gender: Someone whose gender identity encompasses both man and woman. Some may feel that one side or the other is stronger, but both sides are present.

A-gender: A term for people whose gender identity and expression does not align with man, woman, or any other gender. A similar term used by some is gender-neutral

Cis-gender: A term used to describe someone whose gender identity aligns with the sex assigned to them at birth.

Genderqueer: A term for people who reject notions of static categories of gender and embrace a fluidity of gender identity and often, though not always, sexual orientation. People who identify as genderqueer may see themselves as being both male and female, neither male nor female or as falling completely outside these categories

Transgender: An umbrella term for people whose gender identity and/or expression is different from cultural and social expectations based on the sex they were assigned at birth.

Gender fluid: A person who does not identify with a single fixed gender, and expresses a fluid or unfixed gender identity. One’s expression of identity is likely to shift and change depending on context.
Gender dysphoria: Clinically defined as significant and durational distress caused when a person’s assigned birth gender is not the same as the one with which they identify.

Have you heard of the term LGBT+? Today, the full and inclusive acronym for the collective community across the GI and SO spectrum has been expanded to LGBTQIA. That stands for Lesbian Gay Bisexual Transgender Queer Intersex.