The Ikigai concept of life fulfillment 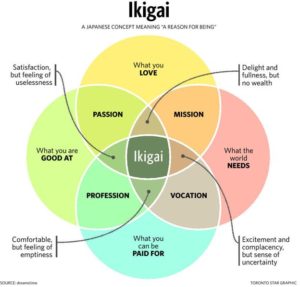 While there is no direct English translation, ikigai is thought to combine the Japanese words ikiru, meaning “to live”, and kai, meaning “the realization of what one hopes for”. Together these definitions create the concept of “a reason to live” or the idea of having a purpose in life. To find this reason or purpose, experts recommend starting with four questions:

“Essentially, ikigai is the reason why you get up in the morning.” Yukari Mitsuhashi

Okinawa, a remote island to the south west of Japan, has an unusually large population of centenarians and is often referred to in reference to ikigai. According to experts on Blue Zones (those areas of the world where people live longest), the concept of ikigai pervades the life of these islanders. Combined with a particular diet and support network of friends, ikigai is helping people live longer on Okinawa as it gives them true purpose. But just knowing what your ikigai is not enough – all of these people put their purpose into action.

From a careers perspective, Ikigai is about feeling your work makes a difference in people’s lives. How people find meaning in their work is a topic of much interest to management experts. Wharton Business School has found that what motivates employees is “doing work that affects the well-being of others” and to “see or meet the people affected by their work.”

In one experiment, fundraisers at the University of Michigan who spent time with a recipient of the scholarship they were trying to raise money for brought in 171% more money when compared with those who were merely working the phone. The simple act of meeting a student beneficiary provided meaning to the fundraisers and boosted their performance. This applies to life in general. Instead of trying to tackle world hunger, you can start small by helping someone around you, like a local volunteering group.