What is a Film Animator?

Their main role in a production house is to tell as story through animation or motion graphics using:

A Film Animator turns an idea into series of visual images to communicate with viewers the desired message or story.

Film Animators may first begin with drawings, paintings, or sculptures, and then innovatively turn these lifeless images into movie scenes with the aid of computer software and cameras.

Film Animators may work for film crews and television crews, generating scenes from a script or storyboard (a sequence of drawings portraying the plot) sketches.

What does a Film Animator do?

How do I become a Film Animator?

Training is highly recommended. There are a number of various ways to become a Film Animator.

Most universities will offer a Bachelor of Arts in Fine Arts or offer a similar diploma.

Training in animation is required given the technical nature of the craft. See under Computer Graphics Animator for more details.

OTHER CAREERS TO CONSIDER: Film Production Designer … or … Sound Engineer

Is becoming a Film Animator the right career choice for me? 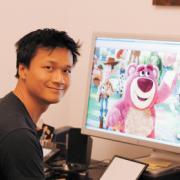